Finland sets the world’s most ambitious climate target in law

by The Financial Eye
in Climate
Reading Time: 3min read
A A

Over 10,000 people took to the streets of Helsinki to demand swift action on climate change. Greenpeace and other NGO’s encouraged citizens to join the march and show the political decision-makers that there’s no time to waste when it comes to climate change. We need to act now.

Finland’s goal to go net-zero by 2035 and then carbon-negative was based on equity as well as science, but it won’t be easy to reverse forest loss

Finland has passed arguably the world’s most ambitious climate target into law. It aims to be the first developed country to reach net-zero, in 2035, and net negative – absorbing more CO2 than it emits – by 2040.

According to Net Zero Tracker, only South Sudan has a more ambitious net-zero date than 2035 and, as a developing country, its 2030 target is highly dependent on international finance.

The target was set based on an analysis by a group of independent economists from the Finnish climate change panel. They worked out Finland’s fair share of the 420 GT of carbon dioxide that the world can emit and still have a two-thirds chance of limiting global warming to 1.5C.

The panel based this fair share on Finland’s share of the global population, its ability to pay to reduce emissions and its historic responsibility for causing climate change. It is believed to be the first target to have been set in this way.

Finland’s environment minister Emma Kari told Climate Home it was “essential” that the target was set with researchers and people from the climate science community. She added:

“High-income countries have to take a progressive and active role in tackling climate change.”

Most developed countries including European Union (EU) and the USA have set 2050 net-zero targets. The Finnish analysis found that Germany and the EU should reach net zero in the early to mid-2030s.

Asked if the EU should set an earlier target date, Kari said targets “should be based on climate science, on the Paris agreement… if the target is not compatible with the Paris Agreement… then we have to turn it up”.

Kari described Finland’s target as “ambitious but achievable” and said that it has broad cross-party support in Finland. Kari is a Green Party minister in a coalition of five centre-to-leftwing parties.

Whether Finland meets its climate targets will largely depend on its forests, which cover three-quarters of its land area. Last week, Statistics Finland released figures which showed that these forests had, for the first time, released more greenhouse gases than they absorbed. 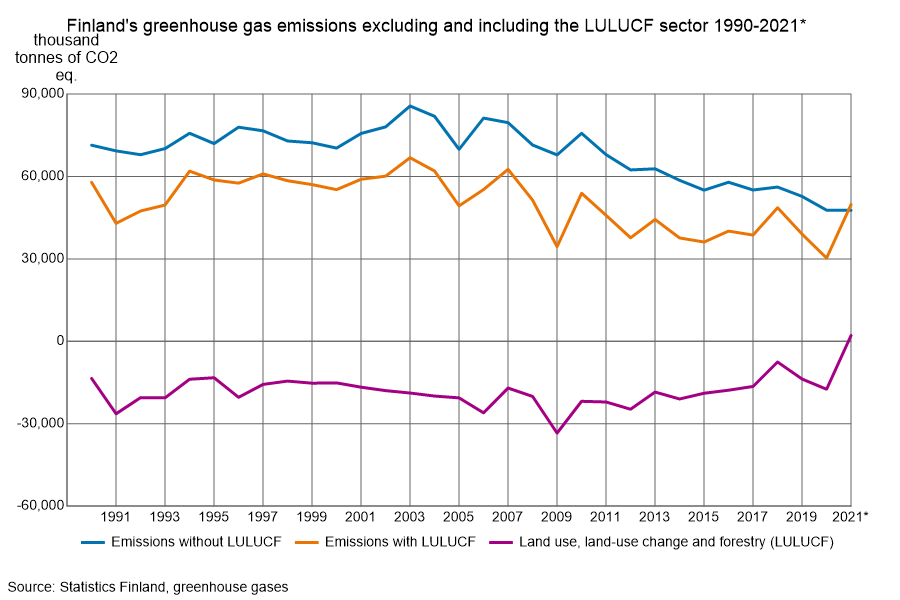 Finland’s emissions without land use, land-use change and forestry (blue), with it (orange) and emissions just from it (purple). (Photo: Statistics Finland)

Emissions from deforestation have been rising over the last decade, cancelling out emissions reductions from energy as the country moves away from fossil fuels. This was due to trees being cut down faster and planted slower, Statistics Finland found.

Finnish logging companies turn their trees into pulp and paper and sell them to be burned for energy, which is often controversially advertised as climate-friendly and renewable.

Kari told Climate Home the ministry of agriculture and forestry was working on its first-ever climate plan.

Russia’s invasion of Ukraine has sped up Finland’s energy transition, Kari added, as the government pushed ahead with wind power and made buildings more energy-efficient and less reliant on fossil fuel heating.

The target will be met without relying on international carbon offsets, Kari said, where one country pays another to reduce emissions on its behalf.

With concerns about sustainability mounting, marine-based transport operators will need to find new ways of reducing their environmental footprint. The...

Firefighters have been battling wildfires in parts of Spain, as the country faces its warmest early summer in decades. Parts...

Ferrari to make 80% hybrid and full-electric range by 2030

EV batteries are an environmental headache. This startup has a solution